Skip to content
What is virtualizatin?
“Virtualization is a technology that combines or divides computing resources to present one or many operating environments using methodologies like hardware and software partitioning or aggregation, partial or complete machine simulation, emulation, time-sharing, and many others.”

This means, that virtualization uses technology to abstract from the real hardware and provides isolated environments, so called Virtual Machines. They are capable to run various applications or even a whole operating system. A goal not mentioned in the definition is to have nearly to native performance for running VMS. This is a very important point, because the users always want to get the most out of their hardware. Most of them are not willing to introduce virtualiztion technology, if a huge amount of CPU power is wasted by managing VMs.

Kernel-based Virtual Machine :
KVM is the first virtualization solution that has been integration into the vanilla Linux kernel. KVM has been initially developed by Qumranet, a small company located in Isreal. Redhat acquired Qumranet in September 2008, when KVM become more production ready. They see KVM as next generation of virtualiztion technology.

KVM Architecture:
Linux has all the mechanism a VMM needs to operate several VMs. KVM is implemented as a kernel module that can be loaded to extend Linux by these capabilities.
In a normal Linux environment each process runs either in user-mode or in kernel-mode. KVM introduces a third, the guest-mode. Therefore it relies on a 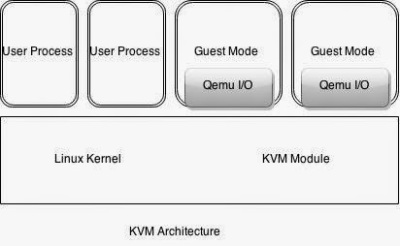 virtualization capable CPU either Intel VT or AMD-SVM extensions. A process in guest-mode has its own kernel-mode and user-mode. Thus, it is able to run an opeating system. Such processes are representing the VMs running on a KVM host. What the modes are used for from a hosts point of view:

Resource Management:
To increase the reuse code as mush as possible they mainly modified the Linux memory management, to allow mapping physical memory into the VMs address space. Therefore they added shadow page tables, that were needed in the early days of x8 virtualization.
The scheduler of an operating system computers an order in that each process is assigned to one of the variable CPUs. In this way, all running process is assigned to one of the available CPUs. In this way, all running processes are share the computing time. Since the KVM developers wanted to reuse most of the mechanisms of Linux. They simply implemented each VM as a process, relying on its scheduler to assign computing power to the VMs.

The KVM control interface:
Once the KVM kernel module has been loaded, the /dev/kvm device node appears in the file-system that represents the interface of KVM. It allows to control the hypervisor through a set of ioctls, commonly used in certain operating systems as an interface for processes running in user-mode to communicate with a driver. The ioctl() system call allows to execute several operations to create new virtual machines, assign memory to a virtual machine, assign and start virtual CPUs.

Emulation of Hardware:
To provide hardware like hard disks, cd drivers or networks  cards to the VMs, KVM uses a highly modified QEMU, This is a so called platform virtulization tool, which allows to emulate  an entire PC platform including graphics, net working, disk drives and many more.

Execution-Model:
Figure describe the execution model of KVM. This is the loop of the actions used to operate the VMs. These actions are separated by the three modes.

let see the which tasks are done in which mode:

While a VM runs, There are plenty of switches between these modes.