Skip to content
A few days back I came across a problem of migrating a Redis Master-Slave setup to Redis Cluster. Initially, I thought it to be a piece of cake since I have been already working on Redis, but there was a hitch, “Zero Downtime Migration”. Also, the redis was getting used as a database, not as Caching Server. So I started to think of different ways for migrating Redis Master-Slave setup to Redis Cluster and finally, I came up with an idea of migration.
Before we jump to migration, I want to give an overview regarding when we can use Redis as a database, and how to choose which setup we should go with Master-Slave or Cluster mode.

Redis as a Database

Sometimes getting data from disks can be time-consuming. In order to increase the performance, we can put the requests those either need to be served first or rapidly in Redis memory and then the Redis service there will keep rest of the data in the main database. So the whole architecture will look like this:-

Beginning with the explanation about Redis Master-Slave. In this phenomenon, Redis can replicate data to any number of nodes. ie. it lets the slave have the exact copy of their master. This helps in performance optimizations.

I bet now you can use Redis as a Database.

A Redis cluster is simply a data sharding strategy. It automatically partitions data across multiple Redis nodes. It is an advanced feature of Redis which achieves distributed storage and prevents a single point of failure.

Replication is also known as mirroring of data. In replication, all the data get copied from the master node to the slave node.

Sharding is also known as partitioning. It splits up the data by the key to multiple nodes. 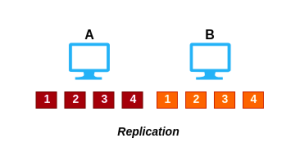 In sharding, the keys are getting distributed across both machine A and B. That is, the machine A will hold the 1, 3 key and machine B will hold 2, 4 key.

I guess now everyone has a good idea about Redis working mechanism. So let’s start discussing the migration of Redis.

Unfortunately, redis doesn’t have a direct way of migrating data from Redis-Master Slave to Redis Cluster. Let me explain it to you why?

I guess now you guys will understand my situation :).

For migration, there are multiple ways of doing it. However, we needed to migrate the data without downtime or any interruptions to the service.

We decided the best course of action was a steps process:-

I know the all steps are easy except the second step. Fortunately, redis provides a method of key scanning through which we can scan all the key and take a dump of it and then restore it in the new Redis Server.
To achieve this I have created a python utility in which you have to define the connection details of your old Redis Server and new Redis Server.

You can find the utility here.

I have provided the detail information on using this utility in the README file itself. I guess my experience will help you guys while redis migration.

I know most people have a query that when should we use replication and when clustering :).

If you have more data than RAM in a single machine, use Redis Cluster to shard the data across multiple databases.

If you have less data than RAM in a machine, set up a master-slave replication with sentinel in front to handle the fai-lover.

The main idea of writing this blog was to spread information about Replication and Sharding mechanism and how to choose the right one and if mistakenly you have chosen the wrong one, how to migrate it from :).

There are multiple factors yet to be explored to enhance the flow of migration if you find that before I do, please let me know to improve this blog.

I hope I explained everything and clear enough to understand.

Thanks for reading. I’d really appreciate any and all feedback, please leave your comment below if you guys have some feedbacks.